In Outer Space, there's tons of things to do. When you have a thing that you want done, contract the Space Aces! We are mostly competent, heavily in debt, and highly motivated!

Do you love rules-lite no-prep sci-fi rpg games like Lasers & Feelings but wish it had a little more to it? Crave the emergent narratives of Fate, PBtA and Genesys system games without all the RULES? Love the danger of OSR games and the simplicity of FKR games? Have good eyesight and want an entire game system that fits entirely on a business card?

Space Aces utilizes a super simple D20 & D6 rolling system that gives you lots of interesting narrative results to rolls. A success can still result in a Complication, and a failure can still result in a Benefit... Ramp up difficulty, tension, and consequences as the mission goes on with the Heat Level meter. Everything you need to play on one business card.

Do you and your crew have the Gumption it takes to complete the mission? Or will you be Taken Out like yesterday's space baguettes? Whatever happens... Adventure Awaits!

And for those of us who need a little extra nudge to figure out an adventure on the fly... try out the patented Space Aces: Episode Guide!

With the Episode Guide you can quickly roll to The Setup the mission, set The Scenes with encounters, npcs, and conflicts, plan out The Snag, and start out with a bang 'in media res' with The Snafu. Guaranteed to generate a wildly memorable adventure every time or your money back. And with the Oracle, all your questions will be answered, allowing for the possibility of solo play!

Turns out Outer Space is chock full of both Star Hulks AND Space Ruins! Often they are full of Loot, Artifacts, and Treasure along with a good helping of Danger! Now you can generate, populate, and explore mysterious alien ruins and ancient derelict starships on the fly any time your adventure calls for it. Featuring a Supply system to keep the intensity up, and a flexible treasure system to give you some great Loots! Can the intrepid Space Aces make it to the Treasure and escape alive? Probably not... but they are just dying to try!

Did you know that Outer Space has like... tons of intelligent beings in it? Next time you meet one, roll up and fill out a character card for them using the Friends & Frenemies module of Space Aces. Every character comes complete with a personality, a forte they can help you with, an exploitable flaw, a desire you can help them with, and a juicy secret. Give them a catchphrase and away you go! Also good for providing inspiration & adding depth to your own Player Characters.

Gotta catch em all? Ever wondered "How to train your space dragon?" Well now you can do both with the Beasties & Besties module for Space Aces. Next time you go on a Spacefari, quickly generate an encounter with a strange new beastie, give them an appearance, personality, trait, and ability, and if you roll your dice right... it just might become your next bestie! Included are simple rules for Wooing, training, and using your new bestie on an adventure. Looks like team rocket is blasting off again!

Three cheers for alliteration! Everybody knows that there's tons of gizmos AND gadgets in the universe. Now you can lovingly craft your own with a generator that offers exactly 209,952 different options. Featuring an upgrade system to enhance your gear more over time. And finally, if you like collecting the whole set, carrying multiple items with shared Prefixes provides bonuses to their rolls!

"I don’t care if you’ve never seen one before. It’s here, it’s huge, it’s hostile. You have a Mech suit. Deal with it."

Who doesn't love Massive Mechs fighting Mega Monsters? Now you can generate a mech frame on the fly, upgrade it as you go, and pilot it to your heart's content. Need a Kaiju to fight? You can build one of those too complete with special abilities, natures, and ultimate attacks, all on two small business cards!

Starship generator and space combat rules on one business card! Generate an amazing ship that you won in a card game complete with sweet uniforms (that may or may not ride up a bit...), and start pew pewing your way to victory with simple 3 phase space combat guidelines. But be warned... space combat is like fat free milk:  best avoided if possible.

Space Aces is a homage to my undying love of happy, hopeful, & campy Sci Fi. It is a tribute to incredible games like Starships & Spacemen, Star Trek Adventures, and all the amazing rules-lite adventure games out there like Lasers & Feelings, Maze Rats, Star Rats, and Lady Blackbird.

Many of the icons and card art were sourced from the super cool folks over at https://game-icons.net. Keep up the great work!

Support this game at or above a special price point to receive something exclusive.

For those self-isolating, experiencing financial hardship, or helping to play-test, feel free to grab yourself a tasty copy gratis. Enjoy! 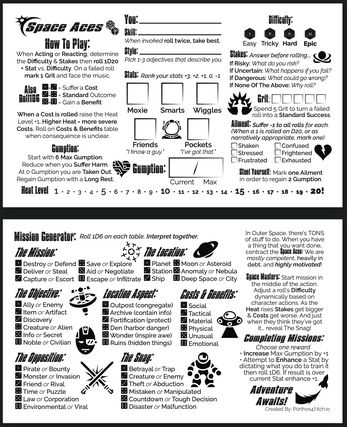